Kitties Are Back Home 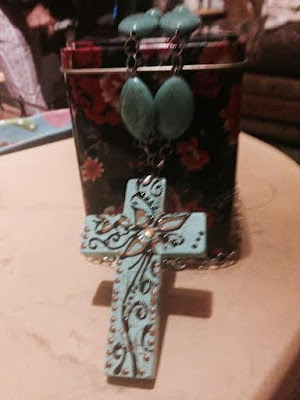 All of our kitties that perished in the Felines First Rescue fire have now come back home to us. We had a cross made to honor their lives from here to across the rainbow bridge. We would like to thank Jesse at Felines First Rescue for taking the extra step in retuning their ashes to us. Godspeed on rebuilding your rescue holding area.

We appreciate your kindness through this very difficult time for both of us.

Posted by Feral Paws Rescue Group at 11:10 AM No comments:

Today while at CCSPCA shelter in Fresno. I was asked to please come and see the kitties that were taken by Animal Control in a hoarder case. That the shelter didn't have space and all are going to be put down.

While looking at the kitties. I was approached by one of the Animal Control Officers that checks on Rescue Groups that they are caring for the animals in a proper manner. This officer has been to our rescue in the past to check on the care of the cats in our rescue. To be approved as a partner in pulling cats from the shelter.

I was very proud to get a pat on the back and told by the officer. He has heard nothing but good and impressive things about our rescue.

It takes a lot of team work and effort and long hours to do what we do in rescue.

Come out and visit with YoYo,
our Cat of the Month: Part Two!
More about YoYo: CLICK HERE

Once again You Helped Make Our
Cat Adoption Event A Success!
We Love Our Partnership With You.
Great Managers + Awesome Crew. 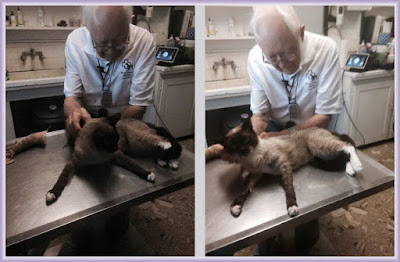 This is Andy getting the cast off his front legs today.
Happy Days! We're so excited for him.
Doc said don't let him jump around for a while,
That's hard because he wants to run and GO
Now that he realized he doesn't have the cast on his leg.
We'll keep a close eye on our little Andy
and eventually he'll be adopted and
have a chance at having a safe, loving forever home.

Sadly Confirmed
All 7 kitties were lost in fire! 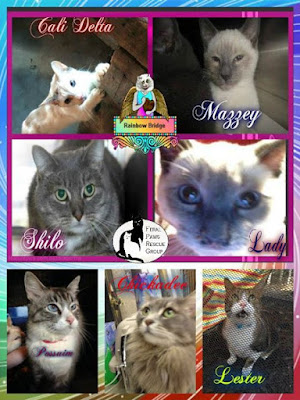 This is a post out of respect of our rescue kitties that died in Oregon on May 29, 2015.

Our rescue had transferred them to Oregon in March of 2015. When a fire occurred on May 29, 2015 lost in the fire were 7 of our California kitties waiting forever homes in Oregon.

Our Rescue pulled these cats from high-kill shelters in California . They all came out of the shelter needing much medical care from our Rescue Veterinarian. Our Rescue put a lot of time and medical attention into each of them in order for them to find their forever homes. They became a big part of our Rescue, with our volunteers spending so many hours with each of them during their time here. We are absolutely heartbroken to lose them in this fire.

Here is each one’s story:

Cali Delta
She was rescued from the CCSPCA in Fresno , a high-kill shelter. Cali Delta was an owner surrender and came to our Rescue very sick with URI and was medically treated by our Rescue Veterinarian. Then she was ready to find her forever home but wasn’t scheduled to be transported to Oregon . On the day of the transport, as we were loading the cats to leave, she went into a carrier and wouldn’t come out at that time. Karmen Price said to just leave her in the carrier and they’d take her to Oregon. Cali Delta was a very loving and sweet cat who loved other cats and animals. She was one year old at the time of her death.

Mazzey and Lady
Mazzey and Lady were bonded siblings rescued from the CCSPCA in Fresno . They were also owner surrenders and both very sick with URI when we pulled them. After being treated by our Rescue Veterinarian they were ready for their forever home. They slept together by wrapping themselves around each other. Mazzey and Lady were very sweet, loving girls. On the day of the transport in March, Karmen Price noticed them and asked if they could be added. They were loaded into carriers and taken to Oregon to find a forever home together. They were 8 months old at the time of their deaths.

Shilo
Shilo was also an owner surrender to the CCSPCA and came to us like so many others, dealing with URI he got from the shelter. Shilo has a twin sibling who is still with our Rescue at our Adoption Center . Shilo wasn’t like his brother who is very outgoing, but rather shy and wanted to hide. I felt sending him to Oregon would be a wonderful chance for him to find a forever home and get that one-on-one attention I felt he so badly needed. The brothers weren’t really bonded together anyway. They look so much alike, however, that it is very difficult right now to see Shilo’s brother running around the Adoption Center... and I think back to Shilo, hiding in a cat tree. Shilo was three years old at the time of his death.

Lester
Sixteen year old Lester was also an owner surrender to the CCSPCA. Lester was very overweight but an absolute sweetheart. It was a difficult decision to send Lester to Oregon due to his age, however, while he was at the Adoption Center he was always alone laying on a cat tree or chair. I loved to spend time with him as he gave kisses and would talk to me. I felt in my heart Lester needed to move on to a forever home as he was shy around other cats but very friendly with humans. After Lester left for Oregon I always asked how he was doing, as something was very special about him. He took my heart while he was at our rescue and it was absolutely heartbreaking to hear he perished in the fire.

Chickadita
Chickadita was rescued from the Los Angeles County Animal Shelter in Lancaster, which is a high-kill shelter, when she was seven years old. Her owner had passed away and no family members wanted her. She was shy at the beginning and came to our Rescue with URI. After being treated by our Rescue Veterinarian, she went to a home through our Senior-to-Senior program here in Fresno . Sadly we got a phone call that her adopter had passed away and were asked to come pick her up. Now she was going on ten years old. She was amazingly beautiful and had now endured the death of two owners. When she returned to our Adoption Center she wasn’t doing well. She would hide and was having a hard time readjusting. We added her to the transport to Oregon with the hope she would find another home. Then on May 29th, her life ended in the fire. I can only pray she has been reunited with her past owners who loved her dearly.

Possum
Possum was an owner surrender to the shelter in Lancaster who we rescued in 2012. At the time he was six years old. He was a clown – always into something! We called him the “bad boy” of the Adoption Center as we’d never know what mischief he’d get into next. He loved every human and every cat he came in contact with. He was such a lover and joy to be around when he wasn’t getting himself into trouble, like tipping over the freshly filled water bowls. One of our Rescue Volunteers wanted to adopt Possum, but he started to exhibit jealousy when other cats would be around this Volunteer and wanted to mark her as “his”. So at that point we decided maybe it was best to let him find a forever home in Oregon. Just prior to the fire, this Volunteer had asked if I could possibly get him back as she missed him so much and despite his trouble-making, and she definitely wanted him. It was one of the hardest calls I have ever made to tell her he was missing after the fire. She still asked if he was found, for him to please be brought back to Fresno . Sadly today I had to make the call that it is confirmed our dear Possum also perished, making it confirmed that seven of ours died that fateful morning.

May God Bless all of their sweet souls in Heaven where we must believe they all are now, in His loving arms.

Because Tango was adopted so fast,
we thought it only fair that another kitty
be given the opportunity of being
June Cat of the Month, too! 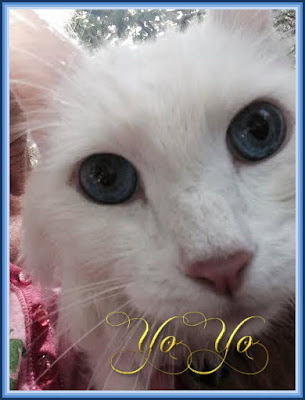 I am a neutered male, 8 years old, white angora/mix, deaf kitty.
I was rescued from Lancaster Shelter in So. CA
My previous owner didn't treat me very well,
and told the rescue he wanted me to die.
I am a loving, healthy cat...I just can't hear anything.
It would probably be best,
if I was in a household without other cats/animals.
I really am a loving cat, and I'd appreciate having a
safe and loving forever home.


We had YoYo at our June Cat Adoption Event and he was adopted, but it didn't work out (one day, then returned to us!).  As with all cats, and especially so with a deaf kitty, it takes time and patience for both adopter and cat to get used to each other.  Sadly, this was not the case for YoYo. We are hoping that somebody special will take the time and effort to care for YoYo, and that he can have a safe and loving forever home. Is that you?
He's waiting!

YoYo Has Been Adopted!
We had to make sure that his home environment
was conducive to his special needs as a totally deaf kitty.
Because of our successful Senior-to-Senior Program,
a very loving and patient person fell in love with YoYo
and has given him a forever loving home!
Click Here
Posted by Feral Paws Rescue Group at 11:57 AM 2 comments: 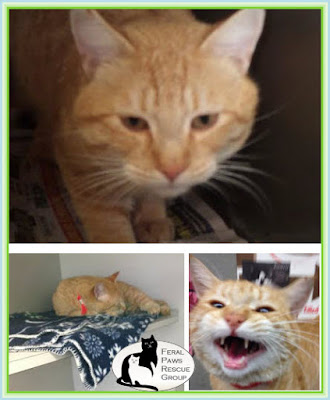 I'm a 2 year old, neutered, male cat.
My previous owners moved and couldn't take me with them.
I'm super friendly and like other cats.
I've been vetted by FPRG Rescue Vet,
so I'm healthy and ready for a new home!
If you would like to adopt me,
CLICK HERE
I look forward to loving, safe, forever home.

Both Tango (above) and
Buttercup (below) have a
new forever home together!
Whoooo-hooooo! 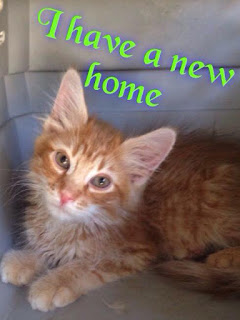 Posted by Feral Paws Rescue Group at 11:46 AM No comments:

Learn About Our Journey...

Writing News For You